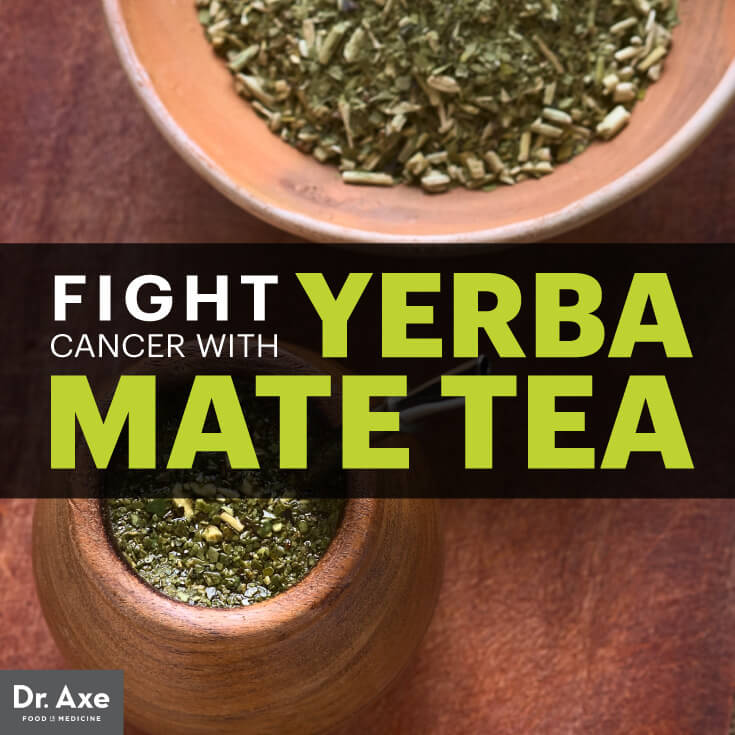 If you drink green tea or coffee, you may want to consider yerba mate. Yerba mate benefits include fighting cancer, and it’s healthier than green tea. For years, we’ve all heard about the wonderful health benefits of green tea, whether it’s matcha green tea or other forms. But could yerba mate be even healthier than green tea?

While the two teas share many common benefits, there is good reason why yerba mate is the national drink of Argentina. It’s a nutritious source of energy, mental alertness and good health — and it has even been shown to fight cancer and other inflammatory diseases! (1)

With less caffeine than coffee or black tea, it’s a smart choice for a non-jittery boost of energy along with 196 active compounds, including vitamins, minerals and antioxidants (green tea has 144). Yerba mate actually has higher polyphenol and antioxidant counts than both green and black teas as well. (2)

What is yerba mate? It’s a tea-like beverage traditionally consumed in South America, where it’s often called “the tea of the gods.” For very good reason, it’s gaining a fan club around the world. In 1964, the Pasteur Institute even found that yerba mate contains practically all the vitamins needed to sustain life. That’s pretty amazing in its own right, and when combined with the following health benefits, you can see why yerba mate is making waves.

Yerba mate benefits are certainly plentiful and range from preventing and treating cancer to boosting energy levels in a more balanced way than other caffeine sources. Its consumption has been scientifically proven to do the following:

A 2011 scientific study found that yerba mate tea leaves have both anti-inflammatory and anticancer capabilities. The study showed that the caffeoylquinic acid (CQA) derivatives from yerba mate tea successfully treated human colon cancer. Scientists discovered that in vitro cancer cells died when exposed to the bioactive compounds present in one cup of the beverage. As the scientists increased the CQA concentration, cancer cells died as a result of apoptosis.

One of the leaders of the study, University of Illinois associate professor Elvira de Mejia, said, “The caffeine derivatives in mate tea not only induced death in human colon cancer cells, they also reduced important markers of inflammation.” Mejia added that this is key since inflammation can lead to cancer progression. (3)

In addition to polyphenols, yerba mate leaves contain saponins. Saponins are phytochemicals, or a class of chemical compounds found in naturally abundant in various plant species. Saponins have beneficial effects on blood cholesterol levels, cancer and bone health. They’ve also been found to specifically stimulate the immune system and aid the body in protecting against disease. They possess significant anti-inflammatory properties as well.

Drinking yerba mate is an excellent way increase your intake of phytochemicals — and, by proxy, phytonutrients — and naturally strengthen your body’s defenses. (4)

Yerba mate contains vitamins A, C, E, B1, B2, niacin (B3), B5 and B complex. It also contains the following essential minerals: calcium, manganese, iron, selenium, potassium, magnesium, phosphorus and zinc. But it doesn’t even stop there! It contains even more additional health-promoting compounds like carotene, fatty acids, chlorophyll, flavonols, polyphenols, inositol, trace minerals, antioxidants, tannins and at least 15 amino acids. (5)

It might seem hard to believe that you get all these nutrients from one little cup, but it’s true! There aren’t many beverages that can boast such a lengthy lineup of health-promoting power figures.

Studies have shown that consumption of yerba mate tea can naturally improve serum lipid levels, thereby lowering cholesterol levels. A study published in the Journal of Agricultural and Food Chemistry showed that yerba mate consumption resulted in a reduction of LDL (bad) cholesterol for healthy dyslipidemic subjects (those with high levels of cholesterol, triglycerides or both, but otherwise healthy) as well as an additional LDL-cholesterol reduction in individuals on statin therapy. By reducing bad cholesterol, it can also help to reduce the risk for various cardiovascular diseases. (6)

The leaves and stems of yerba mate contain a complex collection of saponins, mainly ursolic acid and oleanolic acid glycosides. Studies in animals have also shown that the saponins in this tea can help reduce body weight. (7)

Yerba mate ingestion has also been proven to increase fat oxidation and energy expenditure during exercise. A 2014 study published by Nutrition & Metabolismexamined the effects of yerba mate on healthy males and females. The study concluded that its ingestion can increase the exercise effectiveness for weight loss and sports performance. (8)

Yerba mate is praised for having almost as much caffeine as coffee nutrition, along with the feel-good chemicals of tea and coffee as well. Typically, it has about 85 milligrams of caffeine per cup. Mate contains three stimulants — caffeine, theobromine (the “happy” chemical in chocolate) and theophylline — providing a pleasant morning jolt without coffee’s jitters.

Yerba Mate and Green Tea have these benefits in common:

Yerba Mate has more active chemicals than green tea so consequently it can also:

Yerba mate is a species of the holly family (Aquifoliaceae), with the botanical name Ilex paraguariensis A. Its tea is brewed from the dried leaves of yerba mate, which can be found in the form of an evergreen shrub or tree.

Although mate is an ancient Guaraní beverage, the plant was first cultivated by Jesuit missionaries. In the wild state, the plant becomes a round-headed tree. However, when it’s under cultivation, it remains a small, multi-stemmed shrub that results in a higher-quality tea. The plant requires specific soil and climatic conditions and is grown commercially only in small regions of Argentina, Paraguay and Brazil. (10)

Not a true tea in the botanical sense, yerba mate is produced from leaves and young twigs that are dried, shredded, then typically aged for one year in cedar containers before being marketed as yerba mate loose-leaf tea, tea bags or as a bottled drink. It can also be smoked or roasted, but it’s best to avoid these options (more on that later).

Once brewed, the tea has a greenish color and an earthy, herbal aroma. The flavor of brewed mate is mild, sometimes described as an infusion of herbs and grass reminiscent of some varieties of green tea. It contains caffeine and tannins just like black tea but is less astringent than black tea.

Yerba mate is especially common in Argentina, Paraguay, Uruguay and southern Brazil, as well as in Syria and parts of Lebanon, where it was introduced from Argentina. You may also know this drink as mate or maté, Paraguay tea or Brazilian tea. While the drink can be spelled “mate” or “maté” in English, the latter represents a hypercorrection to distinguish its pronunciation from that of the common English word mate. It’s never spelled with an acute accent in either Spanish or Portuguese since maté in Spanish actually means “I killed.”

What to Buy & How to Use Yerba Mate

It’s ideal to purchase yerba mate products that are organic. You can typically find it as a loose-leaf tea, in ready-to-brew tea bags or as a bottled cold beverage. One great brand that ‘s both organic and fair trade is Guayakí. It not only tastes great, but in 2009, Guayakí became the first Fair Trade Certified yerba mate company in the world through the Institute for Marketecology.

It’s also important to avoid roasted yerba mate that’s heavily smoked since it contains higher levels of polycyclic aromatic hydrocarbons (PAH) than brands not heavily smoked. A good quality brand like Guayakí utilizes a flash-heating process to protect the antioxidants and nutritional properties, and then the mate is dried at low temperatures. Last, the yerba mate is aged for one year in cedar chambers for a smooth, rich and balanced flavor.

When preparing mate tea, bring the water or milk to a simmer rather than a boil. Using boiling water results in a more bitter tea. If you use a loose tea, then use about one teaspoon per cup (less if you want it weaker, more if you want it stronger). Let the tea steep for three to five minutes. You can then have it hot or iced, adding lemon, mint or your favorite natural sweetener. Yerba mate can also be made using a french press, coffee maker or tea pot. When consumed in moderation, yerba mate is typically safe for most people. Since it contains caffeine, it’s important not to consume too much yerba mate tea or consume it too close to bedtime. Some common side effects of caffeine include upset stomach, sleep trouble, nervousness, nausea, increased heart rate and breathing, high blood pressure, headache, ringing in the ears, and irregular heartbeat. If you experience any of these side effects of caffeine overdose after consuming yerba mate, then you should reduce your overall daily caffeine intake.

Yerba mate isn’t likely to pose any threats for healthy adults who occasionally drink it. However, some studies indicate that people who drink large amounts of hot yerba mate over prolonged periods may be at increased risk of some types of cancer, such as cancer of the esophagus, larynx and oral cavity. (11) Smoking in combination with yerba mate seems to greatly increase the cancer risk. One possible explanation is that yerba mate contains PAHs, which are known to be carcinogenic. PAHs are also found in tobacco smoke and grilled meat. (12)

Associations have been made between yerba mate and cancer, but before you vow to never touch this stuff, you should know that research has suggested that the correlation with upper digestive system cancers results almost entirely from hot mate’s temperature as well as combining hot mate consumption with other risk facts like smoking, drinking, nutritional deficiencies and/or poor oral hygiene. Similar links to cancer have been found for tea and other beverages generally consumed at high temperatures. (13)

One large study conducted in 2014 in South America did show a higher rate of esophageal cancer in people consuming yerba mate. The strength of association increased with higher maté temperatures. (14)

Your safest bet is not to drink mate at very hot temperatures, or if you’re really concerned, then you can stick with cold yerba mate beverages. If you are a cancer survivor, have a family history of cancer or just generally don’t feel comfortable drinking yerba mate tea, then by all means don’t add it into your daily rotation of food and beverages. However, as I said earlier, yerba mate has also been scientifically shown to have anticancer abilities, specifically when it comes to killing colon cancer cells.

It’s not recommended for children and pregnant or breastfeeding women. If you suffer from high blood pressure, blood-clotting problems, diabetes, anxiety, alcoholism or any other chronic health issues, then definitely check with your doctor before consuming yerba mate. In general, it’s a good idea to enjoy yerba mate in moderation and not at very high temperatures. Check with your doctor before incorporating yerba mate into your diet if you have any questions or concerns.

With higher polyphenol and antioxidant counts than both green and black teas, yerba mate can offer a serious health boost as well as a moderate dose of energizing caffeine without those terrible coffee jitters. In moderation or on occasion, I think yerba mate’s health benefits outweigh its health concerns.

However, at high temperatures or at too high a rate of consumption, I can understand why yerba mate could cause problems. Even with “healthy” products, moderation is always key to experiencing health-promoting benefits.